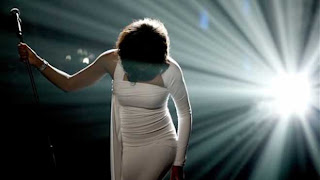 Whitney Houston was murdered, according to claims by private investigator Paul Huebl published in the National Equirer.
The Hollywood detective has allegedly uncovered evidence - including CCTV footage - that points to her being the victim of an attack by two men who were sent to collect a debt for drugs.
The troubled "Bodyguard" singer, who died on February 11 2012 at the Beverly Hilton, is said to have owed in excess of $1.5 million to dangerous dealers before her shock death in Los Angeles.
"I have evidence that points to Whitney being a victim of high-powered drug dealers who sent thugs to collect a huge debt she owed for drugs," he told the tabloid.
He also believes that despite a coroner's report that claims there was no foul play involved, the signs on her body tell a different story.
"Whitney's body shows classic defense wounds that would have occurred while she was battling for her life," he said.
Huebl claims to have discovered the new information through a network of informants and says he is now handing the evidence over to the FBI in an attempt to have the case reopened.
Posted by Unknown at 6:55:00 am